Verifying that recording has captured activity

After the recording has been completed, the captured recordings will be moved from the source systems into the central system. You are then able to review what has been captured. To check that your recording has captured activity (and that it was the activity you expected), click on the Standard Recordings or Filtered Recordings item (depending on the type of recording you ran) in the Recordings tray in the left-hand navigation pane.

The main thing to validate here is that the Start Date/Time from the recording is what you had planned. It’s a best practice to keep your entire recording. You can easily remove individual components later in the process.

In this step, the “business transactions” that have been generated automatically via the recording process must be first transferred to the test repository. At this stage you ensure that only those recordings are transferred that happened on or after the database snapshot is taken. Dialog/batch processes and user sessions that began prior to the start of the recording will not be considered viable and should not be transferred to the repository. This is performed by choosing the Transfer to Repository drop-down menu and choosing the method for transfer. For large recordings, it is recommended to transfer via selection screen and parallel processing.

Here is an example where the selection screen is used to select the exact time frame of when the recording and the system backup were in synch to ensure the most accurate recording.

Once you select your transfer option, you’ll receive a pop-up box where you can click “Yes” to continue

At this point, your recorded scripts are stored in the Testimony Repository and can be used to create an Execution Queue. The Test Script status should show “Test Script Created” 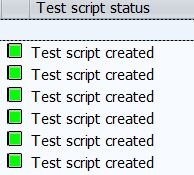