ActiveControl 7.00 introduces the ability to create Transport Of Copies (TOC) for deployment to Production.

This is something that customers have requested, as it was something they were doing previously at an SAP level to reduce the number of transports deployed in production, and by extension, to reduce the time window required for Production import.

Production TOCs are created in the TE Windows GUI. This is done by right-mouse clicking on the required transport(s) and selecting “New Transport of Copies” > “For Production”. 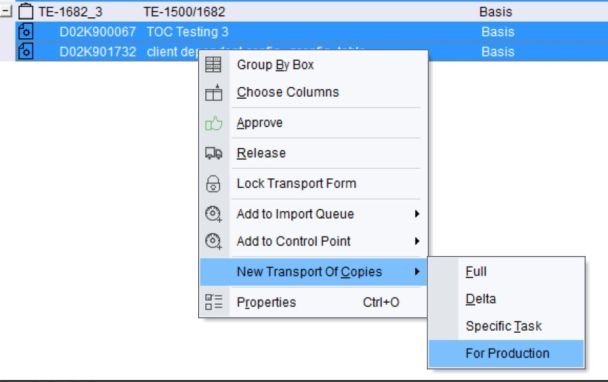 The new Production TOC behaves quite differently from the other TE TOC capability. Key points of note:

This functionality is intended only for Production deployments, and will only work if all the transports imported in QA but not in Production are merged into a single TOC. Side effects could happen if the TOC is created earlier in the path or some transports are excluded from the TOC (and also many of the TE analysers will not work correctly)

2) the system in which the TOC will be created as a valid source system in the path.

3) user performing the Production TOC in the Windows GUI needs to have CREATETOCDEPLOY authorisation activity.