For customers who have implemented separate transport paths for BAU / Production support and Project changes in the same SAP systems (single track) it is now possible to see a consolidated import queue view of the different target systems that represent that same SAP system ID.

This can then be used to properly sequence imports for activities like system refreshes, system builds and project cutovers where projects and BAU go in the same drop to production.

For example, if there are 2 paths where each contains a target for SAP system T01 the import queues for both targets can be viewed together to show a sorted list of all transports that are waiting to be imported. A new “consolidated target” needs to be created and each individual target for the relevant SAP system can be linked to this.

For each of the TST import queues the transports can be viewed individually by path or in a consolidated view across paths:

In Transport Expresso the paths for T01 would look like: 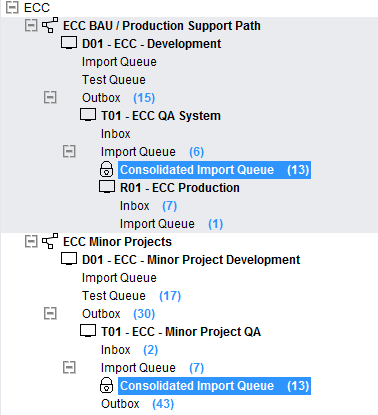 The above shows the linkage between the ECC Test – BAU path import queue and the ECC Test – Minor Projects import queue. Selecting either of the associated consolidated import queues will give a complete view of all transports waiting to be imported for both T01 target systems:

The transports can then be imported collectively across both targets in the correct sequence.