A suite of 25+ out-of-the-box reports are available with ActiveControl o to help manage the SAP Change Management process. The majority of these reports are standard SAP ALV reports that can be exported to MS Excel etc 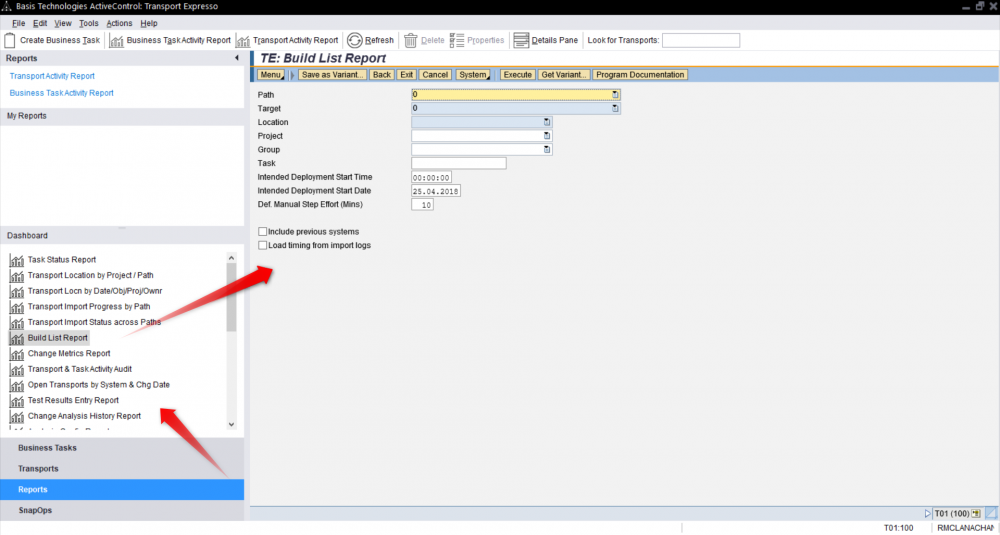 In the Web UI, they are accessed via the ‘Reports tab located at the top of the screen.

Transport Activity Report
Used to pull out ActiveControl data on Transports approved (into or out of) or imported into Target Systems. Transport Expresso ‘Add to Import Queue’ / ‘Add to Control Point’ functionality can be used on report results.

Business Task Activity Report
Used to pull out ActiveControl data on Tasks approved (into or out of) or imported into Target Systems. ActiveControl ‘Add to Import Queue’ / ‘Add to Control Point’ functionality can be used on report results.

Task Status Report
This operational report gives detailed project and task level status information. It provides a snapshot of the status of projects giving both detailed and summary information about the status of all items relating to the projects.

Some of the key data that can be reported upon is:

• Project/Task/Transport reporting showing the current deployment status (e.g. In development, In test, Awaiting production, etc.)
• Project/Task reporting showing the current planning status
• The full details of all items returned (Projects/Tasks/Transports) for the selected criteria are available along with a high level summary of the number of items in each status

Transport Locn by Date/Obj/Proj/Ownr
This report provides transport and location information as follows:

Transport Import Status across Paths
This report is an extension of the Import Status Report, but allows you to view transports over multiple paths. For the report to format the data properly, the Roles assigned to each Target must be consistent across the paths

Change Metrics Report
This report will give totals transport imports (and associated tasks) into selected systems for a date / time range. It can be used to report metrics for systems and projects by priority, group, type, etc.

The data can be reported at transport level or task and project level as required.

Open Transports by System & Chg Date
This report can be used to identify old/orphan unreleased transports that are present in development systems and haven’t been changed since a specified date. This is useful to aid in the clean-up activity of unrequired transports

Test Results Entry Report
This report can be used to give visibility to all test results entered for multiple Business Tasks or even a whole project. It will show negative and positive entries for each Business Task and any comments entered.

Change Analysis History Report
When an analysis is performed the results of the analysis run are logged within ActiveControl. This provides a history of analysis issues along with the action taken by the user.

The change analysis history report allows this history to be reported upon. It gives the full details of the analysis issues along with the action taken by the user (e.g. Approve anyway)

Analysis Config Report
“The analysis configuration report provides a view of which analysis types are switched on for specific targets / locations in Transport Expresso.

The yellow icon shows where the analysis is switched on for the location and the green icon indicates where it’s mandatory. Clicking on the items will show a popup if there are any parameters entered.”

Import Audit Report (TE / SAP comparison)
This report provides an audit of transport imports allowing imports carried out in Transport Expresso to be compared to those performed in SAP / STMS so differences can be highlighted.

It can be used find transports imported via STMS that need to be updated in Transport Expresso.”

Delegation Details Report
This report shows the details of all active delegations in Transport Expresso.

System Change Comparison Report
The System Comparison report allows you to compare two target systems to determine what differences exist between what has been imported into each. A break-down of the missing transport requests (and Tasks) is provided enabling you to take appropriate steps.

*Transport Merge Report *
The Transport Merge report should be run during and just prior to the release of a project (or upgrade project) that is currently using the “Merge” process.

This report should be run during and just prior to the project/release to ensure that the Production Support transports have all been fully merged and that no regression will occur when the project is set live.

Transport & Merge Recon. Report
The Transport and Merge Reconciliation report is used to provide reconciliation from the original transport to all related merge transports along with an import status to show which systems the transport has been imported into.

It provides a linkage into all merged systems so the progress of the original transport can be fully tracked.”

Transport Request Conflict Analysis
The Conflict Analysis report is used to report on conflict analysis issues during the merge process. It can be executed for a specific merge target and all conflicting transports are reported.

Each transport can be double-clicked to view the object details

Change Path Step Analysis Report
Details the current status of each change step per Task, and also the user(s) assigned to each step.

Transport Objects Report
Used to find out at an object level what is contained within Transports, Tasks and Projects.

Manual Step & Activity Report
Used to get either a management summary of the number of manual steps/activities opened/completed each day, or to get a full breakdown of manual items.

Approvers by Target & Location
Administration Report to help easily track what approvers are configured in the system.

Display Change Documents
Audit Report to be able to track what configuration level changes have been done within Transport Expresso.

System Rebuild after Database Copy
Used to identify missing transports after a rebuild/refresh based on a specific date. When not run in test mode this can also be used to add transports back into the relevant import queue as well.